Sound Difference Between A Stratocaster And A Telecaster

Sound Difference Between A Stratocaster And A Telecaster

What Is The Sound Difference Between A Stratocaster And A Telecaster? 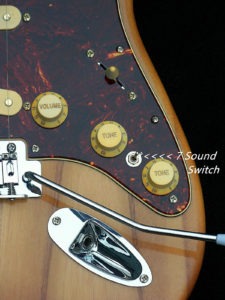 The Stratocaster and Telecaster have similar electronics. First let’s look at the physical differences in the configurations.  They each have a master volume control, but where the Telecaster only has one tone control, the Stratocaster has dedicated tone knobs for the middle and neck pickup but NONE for the bridge pickup. I always wire the so all three pickups have a tone control. The player then has the option to take the “edge” off of any shrill sounds that degrade the music. More about that in a minute. The Telecaster has a 3 position blade switch as follows:

The Stratocaster has a 5  position blade switch for more tones, but  then when we add the Haywire Seven sound switch it will add two more tones not available on any commercial Stratocaster built by Fender.

So, why does the Stratocaster lack a tone control on the loudest most piercing pickup? Is it a defect? No, just a design that was only meant to please the inventor, Mr. Leo Fender.

Leo wanted a pickup position that sounded similar to a steel guitar. So now, the bridge pickup selection has no tone control wired to it whatsoever and no one at Fender Corp. since then has seemed to notice. They have failed to hear what guitarists for years have asked. Can we simply have a tone control on our bridge pickup? I do it with all of my Stratocasters. I also add a toggle switch which will activate the neck pickup in any position of the Stratocaster 5 way switch.

The switching, however, is another story. The Telecaster has always carried a three-way switch, but after guitarists found that they could get more tonal versatility by jamming the Strat’s original three-way switch in between the first and second position and second and third position, Fender outfitted it with a standard five-way selector.