Haywire-If you haven’t checked out Guitar Muse…Please do! It’s all about guitars, guitar music, gear news and more guitar stuff.

It’s great. I read them often. The articles are good and the info is up to date. Below is a great article about us-Haywire. I hope you enjoy it as much as I do. Rick Mariner 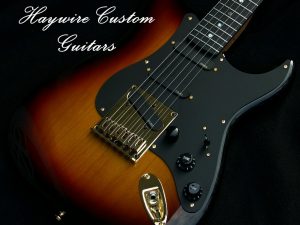 Over at Haywire Custom Guitars they have been (among other things) marrying Stratocasters and Telecasters for quite some time now. The results of this matrimony have been striking to say the least, both visually and in the way they sound.

Rick Mariner – from Haywire Custom Guitars, is always talking to his customers, and that is exactly how this story begins. His clients in Nashville were constantly switching between Stratocasters and Telecasters, often several times during the course of one gig – and they became interested to know if he could produce a guitar that could produce the sounds of both.

The Stratotelia is a Strat – but it’s got a Telecaster bridge and bridge pickup installed. One difference right here is that the bridge is a six saddle bridge, which improves sustain over the 3 saddle types we’re used to seeing on Teles. Obviously, six saddles also provide you better control over your intonation.

Since this is a custom shop guitar – you have many more options as well. The Stratotelia can accommodate either a Fender or Gibson scale neck – which gives you more options on the overall feel as well as the headstock.

You have the choice of Alnico or Active EMG pickups as well.

This thing sounds really great, guys – we’ll show you some video of it in a minute.

Up next we’ve got the Outcaster – also known as the Stratotelia II.

One of the newest additions to the Haywire line, the Outcaster offers all of the options of the Stratotelia, like the choice of Gibson or Fender scale and active EMG pickups – but Haywire has added the option for a two or six point tremolo bridge on this one for those of us who like a little bending capability.

The Outcaster offers even more options – and with the option for the tremolo bridge, it’s one step closer to the perfect marriage of Strat and Tele.

We’ve known Rick over at Haywire for quite some time, and we’ve written a few articles on him and his work over the past couple of years. Haywire is a custom guitar shop – so you’re going to get that quality and attention to detail that you expect from a custom job – but at a price that I think pretty much demolishes the competition.

Another thing you’re going to get is a beautiful guitar that people will notice. One thing I love to do is look through Haywire’s image gallery every now and then just for the breathtaking “wow” factor. From the stunning looks to the amazing sound and playability – Haywire really makes sure they provide the whole package to their customers.