A Treble Bleed Modification allows you to roll off your volume without losing the highs.

We’ll add a treble bleed circuit to your guitar. It will preserve high end frequencies and improve the taper when rolling back your volume control.

Would you like being able to use the volume control without sacrificing tone? 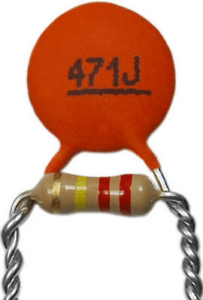 Electricity searches for ground. It gets manipulated on its way there.  Because you turn your guitar’s volume down, you’re allowing some of the current to go to ground.  Rather than send it heading out to the amp to make music it adds bass.

At Haywire we simply install a 220K resistor in parallel with a 470pf capacitor. If you’d like-we can add one to your guitar to preserve high end frequencies and improve the taper when turning your volume down.

There is no charge for this option-simply let us know you’d like it added when your purchasing your new Haywire Guitar or if we’re just repairing yours !